Happy Halloween from The Monster Machine! (a monster picture book)


It's that time of year again, when the night creeps in and the temperatures drop and all the creepy crawly things that should be outside decide to come inside with you where it is nice and warm.
Yes ladies and gentlemen, boys and girls, Halloween is upon us once more! So I'd like to wish everyone a Happy Halloween from myself and all the monsters in The Monster Machine...  (The Monster Machine is not a scary picture book, but it is a monster picture book)

All of the monsters are really excited about Halloween, as it will be their very first one, they have made some special monster Halloween stew to celebrate. I haven't asked what they have put in it...

If you have a copy of the book already why not try to spot all the monsters? all of the monsters in the illustration can be found within the pages of The Monster Machine, apart from the pumpkin and the Halloween monster chef, who is a new addition to the ever expanding clan and also happens to be a bit of a star in the kitchen, according to the other monsters...

If your little monsters are feeling particularly monstrous and creative this Halloween and beyond (who really needs an excuse for monsters?) you can send me their monster drawings and I will add them here to the Monster Machine blog.
Send any monster drawings to nicola@monstermachine.co.uk with your name and where you live and maybe the name of your monster too if he has one!
More on 'The Monster gallery' here

www.monstermachine.co.uk
Posted by Nicola L Robinson at 21:42 No comments:

This year I was honoured to be invited to take part in the Cheltenham Literature Festival with my picture book 'The Monster Machine', published by Pavilion Children's books.

My event was in the very impressive looking Queen's Hotel and I had chosen Monster Mask making as a fun family friendly activity, and also because I love making stuff! :) My event sold out in the week before I was due on so I was both nervous and excited that so many people were going to be bringing their little monsters to see me and make some monster masks.

After my audience was settled and I had been introduced I began by saying how much I have always loved illustrating things with teeth and claws, and one of the children in the front immediately got into a little discussion with me about Dinosaurs, which was lovely.  In conclusion I think Tyrannosaurus Rex is the best because he is the most scary, but Triceratops is also awesome too.

I then read The Monster Machine, on the big screen (I have never seen the monsters so big before) and showed them the monster endpapers too (which I'm rather proud of) before introducing the main event Making Monster Masks!

Monster Masks are made of lots of things, and in the run up to my event I was busy preparing monster teeth, monster horns and monster faces... all the ingredients needed to make monster masks! As well as vast quantities of coloured tissue paper glue and colouring equipment.


Some of the children asked me questions about the  monsters, one of the questions was whether the monsters have names? I told him about our naming competiton with Sir Slobbertongue and Feathertail Fangmouth, and that he is free to name his monster whatever he likes.
One of the mask makers decided to call his monster Freddie, after himself! Haha :)
Some of the big children decided to make masks too...  a couple of them confessed to me :)

There were some superb monster Roars and Grrs coming from the little monsters when they had made their masks... Towards the end we also handed out some colouring sheets and some special monster machine bookmarks, which I have designed and printed for the event.

After the event I signed copies of The Monster Machine in the Waterstones tent, it was lovely to speak to people about monsters and quite a few of you stopped to pick out your favourite monster from the cover of the book. I hope you enjoy it.
As this is the Cheltenham Literature festival there were some very well known names around, and although my visit was brief I did have the surprise of finding the signing table next to mine being inhabited by none other than Tony Robinson! (no relation, haha) and later in the Author Room where I had a very nice lunch and glass of wine I spotted Dr Robert Winston!
but the highlight has to be during the pandemonium of small children having made their masks running around making monster sounds RROOOOAAARRRR!!!! Awesome :)


I'd like to thank the fantastic festival staff and volunteers who worked so hard and helped me with my monster mask making event!
and a huge monster thank you!! to everyone who came to make monster masks with me, I thoroughly enjoyed meeting you all and hope you had fun too. 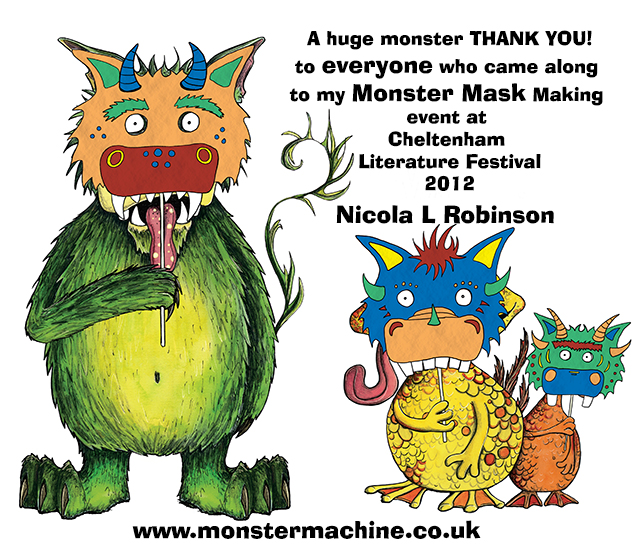 If you were at the event and have spotted a photo of yourself or would like a larger version do send me an email and I'll be happy to send them to you.

Also, if you have any questions or other comments (both the small children and the big children) I'd love to hear from you!


Posted by Nicola L Robinson at 11:36 No comments: